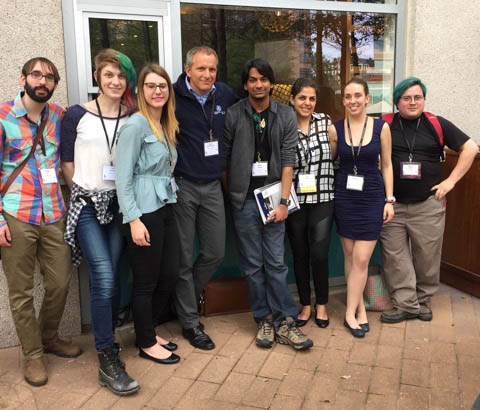 Four members of the U of T Solar System Exploration Group (SSXG), advised by Rebecca Ghent in the Earth Sciences department, presented results from their research at the 2015 Lunar and Planetary Science Conference in Houston, Texas.  Two undergraduates, Cailin Gallinger and Alister Cunje, presented posters detailing their results from Mars and Mercury, respectively; Astronomy MSc student Tasha Urbancic presented a poster with results from her CSA-funded project investigating the use of gravimeters for lunar exploration; PhD student Alex Boivin presented a poster detailing his dielectric permittivity measurements in support of the OSIRIS REx mission; and PhD student Sara Mazrouei gave a talk in a special lunar session, “How young is young?” presenting evidence for changes in the recent impact flux at the Moon.  Sara also served as an LPSC microblogger, reporting on conference events via Twitter, and she presented a poster in the public outreach session. The outreach activity was done in collaboration with other departments and the Center for Planetary Sciences, a cross-departmental, tri-campus center for studying all planets, near and far. All presentations were well-received, and the students got lots of valuable feedback on their work.  Some got to meet and talk with Apollo 17 astronaut Harrison Schmitt, who discussed gravimetry at the Apollo 17 site with Tasha, and asked a question during Sara’s talk; and they also got to know current Canadian astronaut David Saint-Jacques (pictured).  The 2015 LPSC was a fabulous success for all SSXG members, including supervisor Rebecca Ghent, who spoke in the session, ‘Lunar surface properties and processes from a distance’.

Abstracts can be viewed by clicking the following links.